In July, a sudden power outage left 73,000 Manhattan residents in pitch darkness. The blackout was due to a fire in the transformer rather than the scorching heat. Still, major metropolitan areas, like Washington DC, New York City and Chicago, are susceptible to power losses as a result of the intense summer temperatures.

Air conditioners utilize a high degree of power. When temperatures hit the mid-90s, the demand for power can reach 12,400 megawatts. This number is lower than the record 13,322 megawatts extracted to power air conditioners during the July 2013 heatwave in New York City.

How does heat lead to rain?

The sizzling heat brings heavy precipitation. With each rise in degree, four percent more moisture is held in the atmosphere. The increase in water in the air indicates a greater likelihood of severe rains and flooding of bodies of water, like rivers and streams, as well as homes.

The interconnection between high heat and flooding makes it easy to see that heat waves can eventually lead to flooding of homes and businesses. If the power goes out during blazing temps and heavy rains descend, a sump pump powered by electricity will undoubtedly fail.

How necessary are sump pump backups?

Battery-powered backup sump pumps are the solution to power outages. Alternately, installing a generator will keep the main sump pump operational during a blackout that results from overstressed electrical systems. Natural gas generators, for instance, automatically switch on during power failures.

An additional advantage of installing a generator is that the homeowner’s electrical systems, like air conditioning, lights and refrigeration, continue running, despite the electricity being out. Plus, the functional sump pump keeps the home dry in the height of a rainstorm.

Densely populated urban areas are prone to losing power, since the high heat forces more residents to run air conditioners frequently. Homeowners who live in such neighborhoods are advised to install a battery backup or a generator to ensure the sump pump works at all times.

Certain pros and cons exist with the types of backup sump pumps available. Some neighborhoods undergo power cuts that last for days. In such instances, a battery-powered backup sump pump would be useless, since the battery would be sufficiently drained within that time span.

Water-powered backup sump pumps are convenient for those on a municipal water system. When the power is out, such an option is more useful than a well pump, which will fail to operate in the event of a cut to the electricity. Water pumps also do not require fresh batteries.

What energy-saving tips help residents stay cool in the heat? 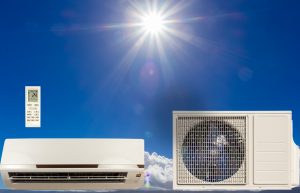 New Jersey is one state that continues to experience sporadic summertime power outages due to storms that result from the sweltering heat. Stay cool without stressing the energy companies’ power grids and possibly avoid a devastating neighborhood power outage—and home flood.

Adjusting the thermostat is one way to prevent unbridled energy use. When not at home, set the thermostat to the highest degree. Thermostats that can be controlled remotely should be scheduled to run a cooler temperature about 30 minutes prior to the homeowner returning.

Windows allow sunshine to pour in and turn the home into a sauna. Close the curtains and pull the blinds to prevent outside heat from becoming trapped inside. Nighttime temperatures can reach the mid-70s, making it an optimum time to keep the windows open to receive cooler air.

Appliance use for ovens and washing machines that utilize significant amounts of energy should be minimal during the day. Operate appliances during the evenings, when it is cooler. During the day, make use of microwaves and crockpots, which use less energy.

Stay hydrated during a loss of electricity. Also, open the refrigerator or freezer minimally to keep the food contents as cool as possible. If the power outage lasts more than four to six hours, examine the food in the fridge and freezer for indications of spoilage.

Eventually, the power will be restored. Be wary of spikes or surges of electricity, as these can damage certain electrical components in air conditioners, refrigerators or the washing machine. Wait a few moments prior to turning on appliances and avoid issues that can result from a spike in demand.

Scorching temperatures can lead to both heavy rains and power outages. When these two latter events occur at once, a sump pump without a backup can result in home flooding. Installing a backup sump pump or generator is far less costly than repairing the water damage from a home flood.

Homeowners who experience water damage, whether it is due to a flood, high humidity or sump pump failure, should contact a reputable water damage restoration company as soon as possible. ServiceMaster Restoration by Complete is prepared to return any water damaged property to its pre-loss condition.

Water damage is a serious concern. Excess moisture seeps into porous structures, like wood, drywall and insulation, causing structural damage. Walls and ceilings weakened by water saturation can start to fail, making the home dangerous to the occupants inside. Mold, too, can take hold and cause various health and structural problems.

ServiceMaster Restoration by Complete promptly dispatches crews to water-damaged properties to assess the extent of the destruction. Our experienced technicians remove the standing water using advanced water extraction equipment. Once we thoroughly dry the premises with powerful dehumidifiers, our specialists provide cleaning services to eliminate waterborne pathogens and return the home to a habitable condition.

As spring lazily rolls around, water will make a robust entrance. From the melting snows…

Three hundred thousand or more species of fungi exist in the environment. In winter, the…

How to Prevent Winter Flooding in your Home

Homeowners are most likely to expect flooding to occur in spring or summer. Rainstorms catapult…