Water and fire damage caused by Hurricane Sandy, one of the costliest storms to ever hit the New York and New Jersey areas.

We are back this week with our series the 10 Biggest Disasters in the History of New York City with a look at one of the most destructive storms to hit New York City and the surrounding areas, Hurricane Sandy.  Hurricane Sandy is the fourth costliest storm in the U.S., causing nearly $70 billion in damage and resulting in the death of 233 people across 8 different countries.

Hurricane Sandy originated as a tropical wave in the Caribbean Sea, west of Nicaragua on October 22, 2012.  Just six hours after its formation, the storm was upgraded to Tropical Storm Sandy and by October 24, it intensified into a hurricane.  Hurricane Sandy first made landfall in Jamaica and strengthened into a Category 2 storm after passing through Jamaica and back into the Caribbean.  Sandy then strengthened again into a Category 3 storm by the time if hit Cuba on October 25.

The next day, Hurricane Sandy moved through the Bahamas and up the Atlantic, not making landfall again until October 29 when it made landfall near Brigantine, New Jersey.  As Sandy moved further inland, it weakened and became absorbed by another storm on November 2.  In total, Hurricane Sandy affected six countries in the Caribbean, the U.S., and Canada and affected 24 states from Florida to Maine and as far northwest as Michigan and Wisconsin.

Hurricane Sandy caused a path of destruction with strong winds and flooding.  The storm left 70 percent of Jamaicans with no power, caused coastal flooding in Haiti, the Dominican Republic, Puerto Rico, and Cuba, and resulted in nearly $3 billion in damage.  Sandy caused the most damage in the U.S., resulting in $65 billion in damage and 160 deaths.  New York and New Jersey were hit the hardest and New York City was hit by a storm surge that caused major flooding and damage.

In this blog, we are going to focus on the effect that Hurricane Sandy had on New York and New Jersey.  Both states experienced extensive flooding that led to widespread property damage and had the highest death tolls of the affected states.  At ServiceMaster Restoration by Complete, our technicians are ready to respond in the aftermath of a major storm in Staten Island, Brooklyn, and the surrounding areas in New Jersey with our flood and storm damage repair services.  We are trained and fully equipped to help homes and businesses recover after sustaining damage from strong winds or major flooding.  We are not afraid to tackle any level of damage to get your property back to its original condition. 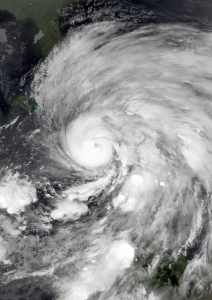 Hurricane Sandy first made landfall in the Caribbean before moving along the coast to New Jersey & New York. Photo courtesy of Wikipedia.org

Early on October 22, 2012, Hurricane Sandy was a low-pressure system that was classified as a tropical depression.  The storm strengthened throughout the day and was upgraded to a tropical storm.  The eye of the storm began to form two days later on October 24 and was upgraded to a hurricane by the National Hurricane Center.  Hurricane Sandy first made landfall near Kingston, Jamaica on October 24 with 85 mph winds and the next morning it hit near Santiago de Cuba with 115 mph winds.

Once Hurricane Sandy passed through Cuba, it weakened into a tropical storm as it moved towards the Bahamas.  A low-pressure system caused Hurricane Sandy to maintain its power and it strengthened into a hurricane again and redeveloped its eye on October 28.  The storm then moved up the Atlantic along the east coast of the U.S. without making landfall before turning northwest.

On October 29, Hurricane Sandy expanded and had a wind diameter of more than 1,000 miles, and it intensified into a Category 2 storm.  The storm made landfall in New Jersey later that day with 80 mph winds.  Over the next few days, the storm moved inland, slowly dissipating before being taken over by another low-pressure system in Ontario, Canada.

As Hurricane Sandy began to threaten the U.S., it was referred to as a “superstorm” or “Frankenstorm” because it was expected to make landfall in combination with a winter storm.  Up and down the East Coast, communities prepared for heavy rain, snow, flooding, and gale force winds.  Utility companies and local governments worked together to prepare for possible power outages and President Obama declared emergencies for states in the storm’s path so they could prepare with the help of federal aid.  The impending storms also caused the cancellation of more than 5,000 commercial flights and Amtrak suspended services in the area

Evacuations of the barrier islands of New Jersey began on October 26 as Governor Chris Christie ordered mandatory evacuations.  Voluntary evacuations began in many areas, the casinos in Atlantic City were closed, and tollways were suspended.  Cities and townships including Hoboken and Logan Township were given mandatory evacuations and many schools across the state were closed.  New Jersey was one of the states that got an emergency declaration from President Obama and was able to get federal assistance while preparing for the storm.

The state of New York also received an emergency declaration from President Obama on October 27.  Flights into and out of the major airports, including JFK and LaGuardia, were cancelled, rail service was suspended, and Governor Cuomo ordered the MTA and Port Authority Bus Terminal to shut down in New York City.  The MTA subways were flooded the previous year by Hurricane Irene, so city officials took action to prevent flooding of the subways.  Medical centers in the area also cancelled surgeries and medical procedures except in emergency situations.

Mandatory evacuations were ordered throughout the state of New York as well as New York City itself.  Many areas of Long Island were evacuated as well as coastal areas that were impacted by Hurricane Irene.  Around 200 National Guard Troops were sent to New York City to help with the preparation and recovery.

Hurricane Sandy directly and indirectly impacted 24 states in the U.S., causing $65 billion in damage, 160 deaths, thousands of destroyed homes, and leaving millions without power for days.  Nearly 20,000 flights were cancelled, and many regional railroads suspended service.  Organizations including FEMA, Direct Relief, and American Red Cross worked throughout the East Coast to help with disaster response, search and rescue, emergency shelters, and providing supplies.  Of the states affected, New Jersey and New York felt the biggest impact.

Hurricane Sandy hit near Atlantic City, NJ with 80 mph winds and the tides were higher than normal at the time it made landfall because of a full moon.  This increased the storm surges which led to major flooding, downed trees and powerlines, and widespread property damage along the Jersey Shore.  Many homes and buildings along the shore were destroyed and a 50-foot piece of the boardwalk in Atlantic City was broken off.

Major flooding in Hoboken and the communities of Bergen County forced tens of thousands to evacuate.  Some were left stranded in their homes and had to be rescued by boat.  The storm resulted in 43 deaths in New Jersey and $38.6 billion in damage.

New York was the hardest hit state and experienced more fatalities than any other state hit by the storm.  While areas of upstate New York did experience some flooding, property damage, and downed trees and powerlines, the damage in New York City was much worse.

Much of the damage in New York city was due to the flooding of the East River.  The overflowing of the East River flooded many areas in Lower Manhattan, including the Ground Zero construction site and subway tunnels that were under the river.  The storm also caused billions of gallons of sewage to spill into the water surrounding New York and New Jersey.  Many homes, buildings, roadways, and transit facilities in low areas of Brooklyn, Staten Island, and Queens were flooded and damaged by a storm surge in the Atlantic Ocean.

It took many people and businesses in New York and New Jersey years to recover from the effects of Hurricane Sandy.  Telethon and benefits concerts were put on to help raise money for Hurricane Sandy relief and the federal government stepped in to supply aid.  Hurricane Sandy also had an effect on the upcoming presidential election.

Relief efforts in the aftermath of Hurricane Sandy took several forms.  Both ABC and NBC held telethons shortly after the storm and raised $17 million and $23 million respectively.  A relief concert with an all-star lineup was held at Madison Square Garden on December 12, 2012 to help raise money and it was streamed on several platforms to reach people all over the world.

The federal government and local governments also did what they could to provide relief for those affected by Hurricane Sandy.  In January 2013, a $50.5 billion Sandy aid bill was approved by the Senate and passed by President Obama to provide relief for the states affected.  In New York, Governor Cuomo established the Governor’s Office of Storm Recovery (GOSR) to centralize the recovery efforts for major storms and determine a recovery plan that will address the most urgent needs in the aftermath.  The GOSR also helps improve housing and infrastructure to reduce the damage caused by a severe storm in the future.

Hurricane Sandy had a major political effect because it hit the U.S. just weeks before the 2012 presidential election and caused a debate on the effects of global warming.  Congressman Henry Waxman even requested a hearing to investigate the possible connection between global warming and Hurricane Sandy.  President Obama also acknowledged in a news conference that he was a believer in climate change and believed that people needed to take action to help reduce its effects.

In response to a report released by the U.S. Army Corps of Engineers that investigated future flood risks in areas affected by Hurricane Sandy, Obama issued an executive order calling for stricter building and siting standards to account for future flood risks due to global warming.

Hurricane Sandy is also believed to have impacted the 2012 presidential election as Obama was lauded by many for his response to Hurricane Sandy, including Republican New Jersey Governor Chris Christie.  Mitt Romney’s campaign was hurt in the aftermath of the storm as it was believed that he was going to cut funding to FEMA which was instrumental in the recovery of Hurricane Sandy.

When Hurricane Sandy made landfall in the U.S., it brought wind and rain that led to flooding and water surges that made the flooding worse.  Homes and businesses were destroyed, tens of thousands were displaced, and millions were without power even after the storm.  New York City experienced major flooding that caused billions in damage and shut down public transportation.

At ServiceMaster Restoration by Complete, we understand the impact a major storm like a hurricane can have on homes and businesses.  We provide professional flood and storm damage restoration services to help those affected by flooding and property damage caused by a severe storm.  Our technicians are ready to respond in any disaster scenario, including major disasters like Hurricane Sandy, to help with the relief effort.  We can rebuild properties damaged by wind and floods to restore them to their original condition.  Our disaster restoration crew will help bring some relief to a difficult situation. Contact ServiceMaster Restoration by Complete today for more information.

Recent Storm Damage and Flooding in the Northeast

The northeast’s 2019 spring season is recurrently hit with severe storms. Up and down the…

How to Protect Your Home from Storm Damage in New Jersey

The Newark, NJ area has experienced its fair share of storms from thunderstorms to hurricanes…