New York City is a great American city that attracts people from all over the U.S. and the world.  The history of New York City dates back to 1624 when it was founded as a trading post by Dutch colonists who named the post New Amsterdam.  In 1664, the city came under British control and it was renamed New York after the Duke of York, the brother of King Charles II.  New York City was briefly the capital of the U.S. from 1785 to 1790 and since 1790, it has been the largest city in the U.S.

New York City is considered one of the greatest cities in the world and is seen as a symbol of freedom, peace and cultural diversity.  The city is home to some of the world’s most recognizable landmarks such as the Empire State Building and Statue of Liberty, and it is a major hub for business and world class entertainment.  However, New York City has experienced its fair share of disasters and hardships.

At ServiceMaster Restoration by Complete, our technicians are dedicated to responding to disasters that affect homes and businesses in Staten Island and Brooklyn, NY.  We are ready to respond to floods, fires, and storms of all sizes to limit the damage to homes and commercial buildings and get them restored as soon as possible.  In our new blog series, we are going to highlight some of the worst disasters that have happened in New York and how these disasters affected New Yorkers and implemented changes.  Our first in this series delves into the Triangle Shirtwaist Factory Fire of 1911, a disaster that led to legislation that improved safety standards and regulations in factories. 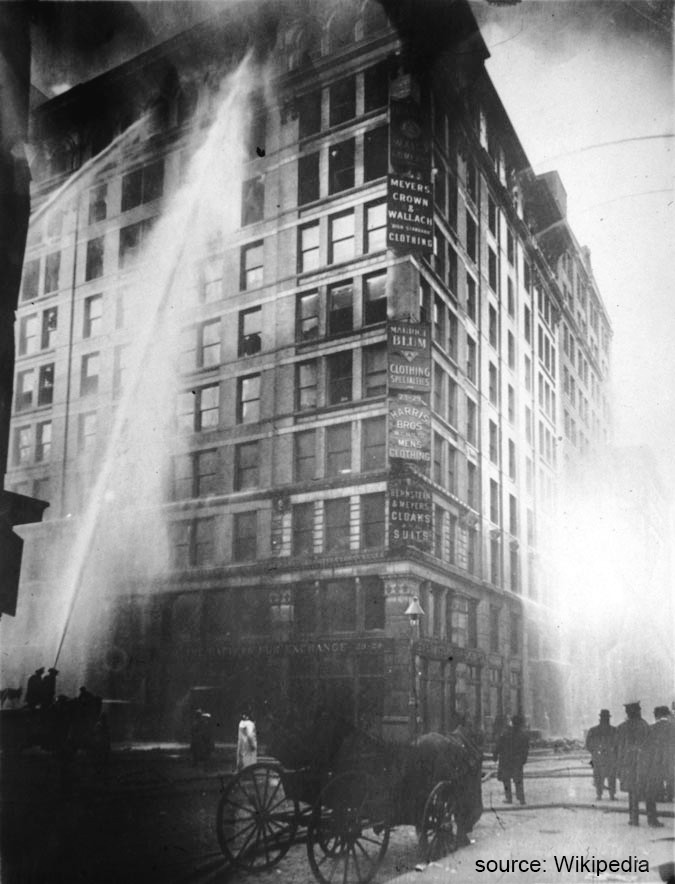 Triangle Shirtwaist Factory: Before the Fire

The Triangle Shirtwaist Factory was located in the Asch Building at the intersection of Greene Street and Washington Place in Greenwich Village in Manhattan.  The factory itself was on the 8th, 9th, and 10th floors.  The factory was owned by Max Blanck and Isaac Harris, who ran the factory like a sweatshop and had a questionable history regarding fires in their places of business.

The Triangle Shirtwaist Factory had around 500 employees, most of whom were young women in their teens and twenties who were Italian and Jewish immigrants.  These women worked in cramped workstations on the top floors of the building and there was only one working elevator at the time of the fire that was accessed through a long, narrow corridor.  Of the two stairways that went from the factory to street level, one stairway only opened inward and the other was locked by Blanck and Harris to prevent unauthorized breaks and employee theft.  The only other way out was a fire escape that was poorly constructed.

The women in the factory worked 9 to 12-hour days Monday through Friday and 7 hours on Saturdays, making $12 to $15 per week.  In September of 1909, the International Ladies Garment Workers Union (ILGWU) led a strike against the factory and by November of 1909, other textile manufacturers in New York were also dealing with a worker’s strike.  The strikers were demanding better pay, shorter hours, and safer working conditions.  Around 20,000 women participated in the strike, making this the largest strike by women in U.S. history.  While the striking workers were able to win some of their demands, Blanck and Harris resisted and instead had their striking workers arrested.

In addition to their implementation of sweatshop conditions and resistance to striking workers, Blanck and Harris had a curious history of fires within their factories.  Fires in textile factories were common at the time, yet Blanck and Harris never took any precautions, including installing sprinkler systems, to prevent fires or protect the safety of their workers.  The Triangle Shirtwaist Factory experienced two fires in 1902 and the Diamond Waste Company factory, also owned by Blanck and Harris, experienced fires in 1907 and 1910.  It has been speculated that these fires were started purposely by Blanck and Harris to collect money from their fire insurance policies.

Unlike the previous fires in the Triangle Shirtwaist Factory, the fire on March 25, 1911 was an accident that happened during business hours.  However, the refusal of the owners to implement fire safety precautions proved to be deadly.

The fire started at about 4:40 pm in a scrap bin on the 8th floor of the building.  It is believed that a cigarette butt or match was thrown into the bin of scrap fabric and ignited the scraps very quickly.  A manager grabbed a fire house to put out the fire, but the rotted hose and rusted valve was of no use.  The fire started to spread quickly, and the panicked workers began running for the exits.

Workers on the 8th and 9th floors ran for the elevators, stairways, and fire escapes to evacuate the building.  The one functional elevator that could only hold 12 people at a time made four trips to evacuate the workers before it was no longer functional due to the heat.  The door to the street at the bottom of the stairway was locked, trapping workers inside who were then burned to death.  The poorly constructed fire escape collapsed when workers crowded onto it, causing them to fall 100 feet to the street.  Desperate women began jumping down the elevator shaft and out the windows, falling to their deaths.  The fire department ladders only reached as high as the 7th floor and the nets the firefighters used to catch the jumping workers ripped under the pressure.

Many who were on the 10th floor, including the owners, managed to escape to the roof and jump to a nearby building.  The other survivors were those who managed to escape by the elevator before it buckled from the heat.  The fire lasted a total of 18 minutes and resulted in around 146 deaths.  Those who lost their lives died from suffocation, burning to death, or injuries and blunt force sustained from jumping down the elevator shaft and out the windows. 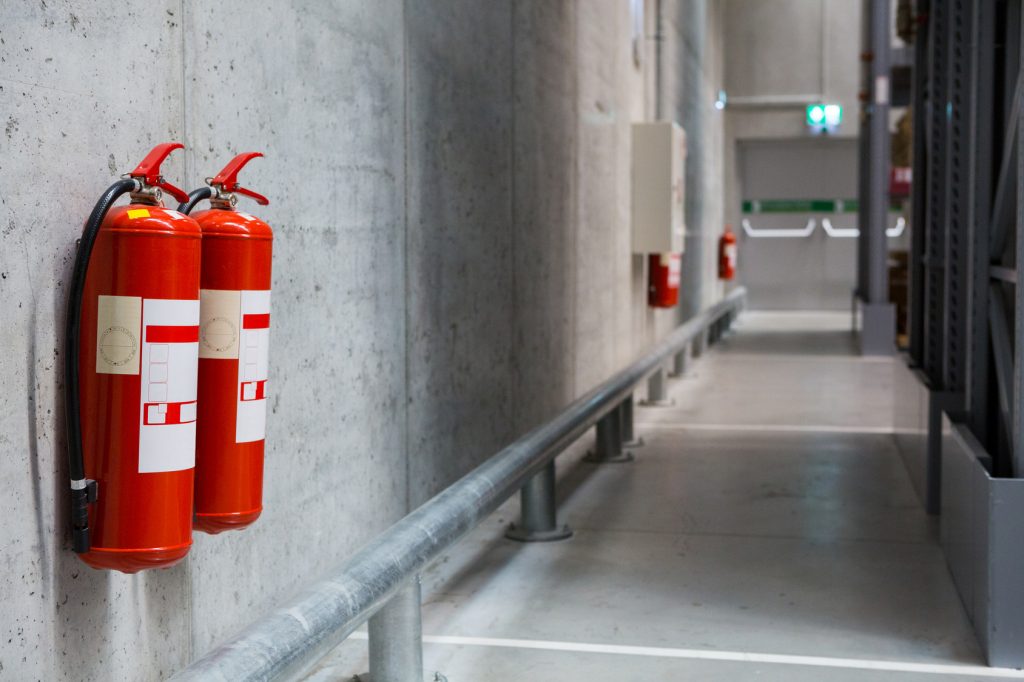 The Factory Investigation Commission was formed by the New York State Legislature to inspect factories and ensure that they were providing safe and sanitary working conditions for their employees.  These investigations resulted in 38 new labor laws, including the Sullivan-Hoey Fire Prevention Law.  This law made it mandatory for factories to install sprinkler systems, fire extinguishers, and alarm systems while allowing access to the outside of the building for evacuations. 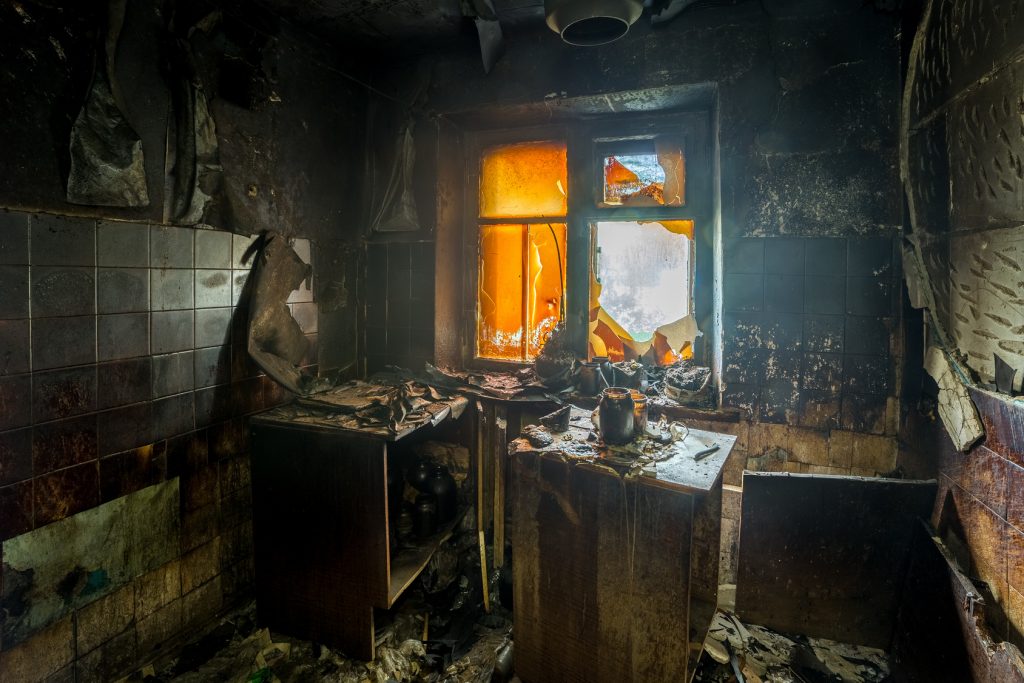 Just because a fire happens doesn’t mean all is lost. ServiceMaster Restoration by Complete are experts at fire damage restoration for your home or business

The Triangle Shirtwaist Factory Fire was an unspeakable tragedy and one of the worst disasters in the history of New York City.  While the immense loss of life is unfortunate, the tragedy did lead to important reforms and legislation to help prevent workplace fires and protect the safety of employees.  The Remember the Triangle Fire Coalition is currently working to have a permanent memorial installed at the site of the fire.

Even though there are laws and regulations in place to help prevent workplace fires and minimize their damage, it is still dangerous when a fire occurs.  A workplace fire will still put lives at risk and cause very serious damage to the building.  If your business in Staten Island or Brooklyn, NY has been affected by a fire, do not hesitate to contact ServiceMaster Restoration by Complete for our fire damage restoration services.  We will quickly limit the spread of the damage and stabilize the building before creating and implementing a full-scale restoration plan.

When the cold winter weather comes, your attention turns to keeping you, your family, and…

10 of the Biggest Disasters in the History of New York City Blog Series: 9/11 Attacks

Furnace Puff Backs: What Are They and What Should I Do?

With winter fast approaching, the weather will only get colder. To help protect yourself from…